Sukaina al-Zayer is an unlikely beauty queen hopeful. She covers her face and body in black robes and an Islamic veil, so no one can tell what she looks like. She also admits she's a little on the plump side.
But at Saudi Arabia's only beauty pageant, the judges don't care about a perfect figure or face. What they're looking for in the quest for "Miss Beautiful Morals" is the contestant who shows the most devotion and respect for her parents.
"The idea of the pageant is to measure the contestants' commitment to Islamic morals... It's an alternative to the calls for decadence in the other beauty contests that only take into account a woman's body and looks," said pageant founder Khadra al-Mubarak.
"The winner won't necessarily be pretty," she added. "We care about the beauty of the soul and the morals."
So after the pageant opens Saturday, the nearly 200 contestants will spend the next 10 weeks attending classes and being quizzed on themes including "Discovering your inner strength," "The making of leaders" and "Mom, paradise is at your feet" — a saying attributed to Islam's Prophet Muhammad to underline that respect for parents is among the faith's most important tenets.
Pageant hopefuls will also spend a day at a country house with their mothers, where they will be observed by female judges and graded on how they interact with their mothers, al-Mubarak said. Since the pageant is not televised and no men are involved, contestants can take off the veils and black figure-hiding abayas they always wear in public.
The Miss Beautiful Morals pageant is the latest example of conservative Muslims co-opting Western-style formats to spread their message in the face of the onslaught of foreign influences flooding the region through the Internet and satellite television.
A newly created Islamic music channel owned by an Egyptian businessman aired an "American Idol"-style contest for religious-themed singers this month. And several Muslim preachers have become talk-show celebrities by adopting an informal, almost Oprah-like television style, in contrast to the solemn clerics who traditionally appear in the media.
Now in its second year, the number of pageant contestants has nearly tripled from the 75 women who participated in 2008. The pageant is open to women between 15 and 25. The winner and two runners up will be announced in July, with the queen taking home $2,600 and other prizes. The runners up get $1,300 each.
Last year's winner, Zahra al-Shurafa, said the contest gives an incentive to young women and teens to show more consideration toward their parents.
"I tell this year's contestants that winning is not important," said al-Shurafa, a 21-year-old English major. "What is important is obeying your parents."
There are few beauty pageants in the largely conservative Arab world. The most dazzling is in Lebanon, the region's most liberal country, where contestants appear on TV in one-piece swimsuits and glamorous evening gowns and answer questions that test their confidence and general knowledge.
There are no such displays in ultra-strict Saudi Arabia, where until Miss Beautiful Morals was inaugurated last year, the only pageants were for goats, sheep, camels and other animals, aimed at encouraging livestock breeding.
This year's event kicks off Saturday in the mainly Shiite Muslim town of Safwa, and mostly draws local Shiite contestants. But it's open to anyone — and this year, 15 Sunni Muslims are participating, al-Mubarak said. "This is a beautiful thing," she added.
There have long been tensions between the two sects in the kingdom. Hard-liners in the Sunni majority consider Shiites infidels, and the Shiites often complain of discrimination and greater levels of poverty.
Al-Zayer, a 24-year-old international management student, said she signed up because she is the "spitting image" of her mother. "I'm proud of my devotion to my parents," she said.
What does she think of Lebanon's beauty contests?
"It's a matter of cultural differences," she said. "In Saudi Arabia, they are Islamically unacceptable." 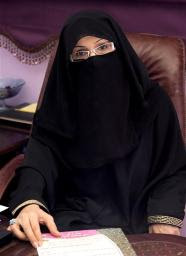 Awsaf al-Mislim, another contestant, said if she does not win the crown, she will have won something more important.
"I will be proud to show everyone that I competed with the others over my devotion to my parents," the 24-year-old said.