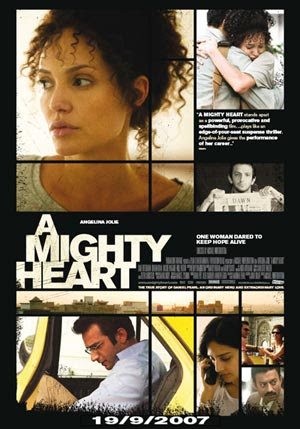 A Mighty Heart (o preco da coragem)
The film is based on Mariane Pearl's account of the terrifying and unforgettable story of her husband, Wall Street Journal reporter Danny Pearl's life and death
The story of Daniel Pearl is a tragic one. I remember following it all on the news until the fateful day of his horrific beheading. Just imagining what his family and friends could have been thinking during the whole ordeal is tough to fathom, but when his wife is there with him in Pakistan, pregnant with his first child, your heart must go out to them. Pearl's widow, Mariane, used her journalistic skills to write a novel on what transpired from his kidnapping to eventual murder. Her words are, I'm sure, haunting and filled with an unbearable amount of love, both lost and strengthened. To have the courage to allow that story be told to the world is amazing. Director Michael Winterbottom is definitely the man to be trusted with such material and he does not let us down here with A Mighty Heart.
Being a story of nonfiction that so many people know, it takes a bit of craft and ingenuity to make it fresh and interesting to the audience. Winterbottom, as a result, shoots the film hand-held and up-close with numerous cut-ins of actual news footage for added realism. The editing of documentary stock with the actors portraying our leads, both in the present and in flashbacks to the past, is expertly handled. There are no missteps visually at all as Winterbottom knows how to evoke emotion with economy. When the men on the search for Pearl finally confront the atrocity, it is in their reactions to the video that makes us understand the brutality. We don't need to be shown the carnage because the faces of these men say it all.
Give credit to Angelina Jolie for coming into this project with dedication and professionalism. Her real life persona is nonexistent as she is fully taken over by Mariane Pearl. Her accent is impeccable, especially watching scenes where emotions take over and yet the accent still never falters. She embodied the strength that allowed Pearl to deal with the days and weeks desperately seeking answers. It all culminates in a heart-wrenching moment of grief and release of all the feelings she refused to let take over until absolutely necessary. I was completely impressed by her performance.
The other actors are fantastic as well. Dan Futterman plays Danny Pearl with integrity and love; he was a fearless man who believed in his job and the search for truth. Irfan Khan follows up his brilliant turn in The Namesake with another solid role as the police captain, and Denis O'Hare, Will Patton, and Archie Panjabi are wonderful as others trying their hardest to get through it all. This is not a vanity project for Jolie as there is a good portion in the middle of the film where she disappears. The movie's supporting cast does an admirable job in never letting it falter without the one character in the middle of it all.

Much like United 93, A Mighty Heart is a story that is tough to experience, but also one needing to be seen. There are few things that I can say went wrong with the film, and although I may never have the necessity to view it again, I'm glad I took the time to sit down with this tale of hope, compassion, and life in the midst of devastating tragedy.