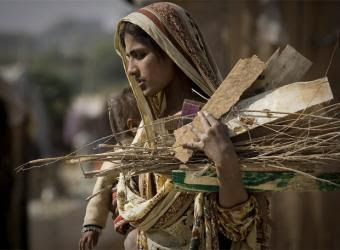 Strong jolts of earthquake have been felt in parts of Punjab and NWFP.

According to Geo News, strong jolts of earthquake have been felt in Islamabad, Rawalpindi, Mansehra, Peshawar, Khyber Agency and other adjacent areas at 01:53 AM.

According to Met office Islamabad, intensity of earthquake has been registered 6.5 on the Richter scale.

According to sources an aftershock measuring 6.0 on Richter scale has been forecasted within next hour.
=) Carol às 12:55 3 comments:

It's a simple dish made with canned chickpeas and the help of my trusty rice cooker. 30-minute-dish

A couple of onions, a can of chickpeas, a few spices and my rice cooker all ensured that my one-pot meal was ready by the time the heating system was sorted out. For pretty much instant yet mildly flavoured rice, I added two bay leaves, a stick of cinnamon and a large black cardamom to the water in the rice cooker.
In the 20 minutes that it took to cook the rice, I sliced some shallots and an onion, and grated ginger and garlic. Once those were nicely browning in my wok, I add the drained and rinsed chickpeas and sauteed them for a bit with spices and salt. Then I added a handful of halved cherry tomatoes and add those in as well.
The chickpea mix was ready by the time the rice was done, and all I had to do was mix the rice in. For myself, I crumbled some lovely little dried Mexican chillies - pequin chiles - over my rice to give it some heat.
This chickpea rice, served with a dollop of Greek yogurt and some wonderful spicy pickled whole baby mangoes (maavadu or vadu maanga). 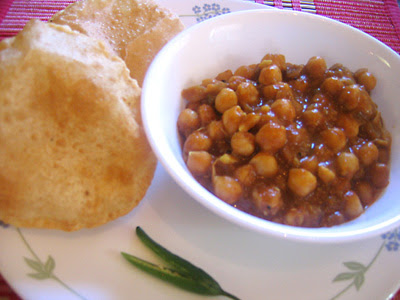 2. Place chick peas in their soaking liquid in a heavy 3-4 quart saucepan. Add bay leaf and a dab of ghee -- bring to a full boil. Reduce heat to moderately low, cover with a lid and boil gently for 1.5 - 3 hrs until beans are soft. If using a pressure cooker, combine ingredients in a 6 quart pressure cooker, cover and cook for 30 minutes. Remove from heat; let pressure drop by itself.

3. Drain chick peas, saving liquid. Discard the bay leaf. Take out 1.3 cup of the soft beans and mash to a coarse paste.

5. Heat 3 tbsp of the ghee in a heavy 2-3 quart pan over mod. heat. When it is hot, stir guinger, green chili and fry until browned. Remove pan from heat and dprinkle in the turmeric, paprika, ground coriander, cayenne and asafetida. Stir well. Place pan over the heat and immediately drop in the tomato. Stir fry for 4-5 mins or until ghee separates from the spices and tomato.

5. Stir in salt, whole chick peas, mashed chick peas, 1/2 cup of the cooking water and the amchoor powder (or lime juice). Reduce heat tolow, cover and simmer until liquid is reduced to a thick sauce. Stir in ghee, sprinkle with garam masala and the chopped coriander garnish.
=) Carol às 12:48 3 comments:

The Russia’s scientists and theologians are surprised with the spontaneous emergence of inscriptions on the body of a toddler of Dagestan.

According to European media, replacing itself periodically, an apparent quotation from the Koran Arabic script appears regularly on the back, legs and hands (infrequently - on stomach and head) of 9-month boy Ali Yakubov of Krasno-Oktyabrskoe, a village of Kizlyar district, Dagestan, Russia.

During the phenomena the infant temperature rises to 40 ° C.

Prior to giving a birth prematurely, Madiana, a mother of toddler, complained unsuccessfully of crying appearing from her tomb-doctors did not believe in. “But by the late term doctors themselves were convinced that the unborn baby is crying,” - said Mr. Ahmedpasha Amiralaev, a chairman of the Sagida Murtuzalieva Charity.
the infant was born with a coronary heart disease and a transparent skin, through which all the intestines were seen. Doctors have warned young couple Yakubov, that the newborn will live only 2-3 days.

Arabic letters, words, and then the entire texts began to appear on the body of the boy immediately after birth. “At first, his chin came hematoma. When the bruise came down, left the word” Allah “- said Mrs. Madina Yakubov, a mother of Ali.

While clergy understood an observable fact as a divine sign for humankind, medical professionals cautiously approach an event with mentioning a rare medical condition allowing grazes to be seen on a skin longer than usually.

Fear and anxiety growing in Pakistan
A string of deadly attacks in Pakistan in the past week, including one on the army's HQ in Rawalpindi, has highlighted the increasing militant threat ahead of a planned army offensive in the Taliban stronghold of South Waziristan.
Here Pakistanis, for whom bomb attacks have become part of life, discuss how the army should deal with the militant threat

Here Pakistanis, for whom bomb attacks have become part of life, discuss how the army should deal with the militant threat.

live next to the army HQ in Rawalpindi, which was under attack on Saturday. There is a lot of hype created by the media about these attacks.
Yes it was a big attack and yes, there was a siege. But I didn't feel threatened in any way. The army was very effective in taking control of the situation and the world didn't come to an end.
When there are frequent attacks they become second nature and they stop bothering you. You get accustomed to them.
I am not saying that the loss of human life doesn't matter.

These attacks have a negative, but also a positive effect. Do you remember the video of the girl being flogged by the Taliban? That changed public opinion against the Taliban. These suicide attacks consolidate it.
I can confidently say that more than 90% of people in Pakistan are against the Taliban. Five years ago the reaction was at best, confused.
This is extremely important in defeating the Taliban.
At this point a military operation seems the only solution. But what worries me is that innocent people will be killed.
The short-term solution will be to infiltrate these areas.
But more importantly, the long-term solution is education. Extremism has little to do with guns and weapons, it is a state of mind which can only be altered through education. The government needs to revise our education policies in order to end the fan-following of these bigoted mullahs.


Doctor in Peshawar
Last week's blast in Peshawar happened in front of one of the gates of the hospital where I work - the biggest hospital in the NWFP. There were many seriously injured people and I was one of the doctors providing first aid to them.
We've had quite a few blasts this year in Peshawar. People are very scared. Every time I go to the market I worry about bomb blasts. We are being targeted and our life has become very difficult.
We are waiting and hoping that the situation will get better. What else can we do?
I see the latest attacks as an act of desperation by the militants
The army defeated the Taliban in Swat. But other areas need urgent attention. The operation in South Waziristan needs to begin as soon as possible.
We are anxiously waiting for something to be done, for the operation to be conducted as soon as possible.
I see the latest attacks as an act of desperation by the militants. This is a fight for survival for them. They react in this manner when they are threatened. When the operation in Swat started, there were a few attacks in Peshawar.
Now that an operation in South Waziristan has been announced - they attack the army headquarters.
Everybody is miserable and sad. We don't know what will happen.


Rafique: "Nothing is good news any more"
I am a TV presenter and while I try my best to remain indifferent to the news I read, the attack in Swat made me realise that my voice and expression was a bit too grim. It was devastating to find out that a 13-year-old kid carried out this attack.
The fact that children are being brain-washed into committing suicide attacks is a matter of great concern.
The army need to realise that there is a great challenge ahead. They thought that they had broken the back of the militants in Swat.
But the very fact that the attack happened a day after the attack on the army HQ means that the militants are very much together and well organised, despite the death of Baitullah Mehsud. There is no leadership crisis in the Taliban.
The attack on the army HQ proves in a way that militants are frustrated that they have been dismantled in Swat. They wanted to show that they are still a force to be reckoned with and they struck back with full force.
The army need to go to Waziristan. The operation has been delayed for a long time and there's no reason to delay it any further.
Why have they delayed it? It could all be about deployment. The army is also in Malakand, now south Punjab is coming into the picture as well. The army must be struggling to be in all those places.
People are worried that the delay of the South Waziristan operation puts lives in danger. I am concerned because the number of casualties has risen dramatically. Nothing is good news any more.

The Taliban are trying to make a statement. They do not want their territory in South Waziristan invaded.
I don't think Pakistan is even capable of carrying out such a big operation right now. The repercussions are going to be more bomb explosions and suicide attacks.
That greatly damages the business climate and that in its turn affects everyone.
Things are deteriorating - over 60% of businesses have closed down since 2007. Our livelihoods and the future of our generation are at stake.
I am scared of the fact that I might see the end of Pakistan in my lifetime
I work on the creative side of the industry. The advertising industry is greatly affected by businesses shutting down, which makes things difficult for me.
People in Islamabad are on red alert. The area where the UN office is - that's a central and posh area of Islamabad. Yet it was attacked.
First it was Karachi, now it's Islamabad. When you live in a place which is under attack you think twice before going out to get bread. People are very scared and you can easily see it - there are fewer people on the streets.
America has responsibility. "Afpak" strategy - this is something I am afraid of. Pakistan is very different from Afghanistan. I am afraid that all America wants is to establish bases in Pakistan to use as a launching pads to conduct its operation in Afghanistan.
The army should try to consolidate the situation within Pakistan's borders before focusing on areas close to the border with Afghanistan. If they can't provide security in Islamabad, how are they going to sort out Waziristan?
The popular opinion is that we are being sold to America piece by piece. Our national integrity is at risk.
"I am scared of the fact that I might see the end of Pakistan in my lifetime"
=) Carol às 08:17 1 comment: 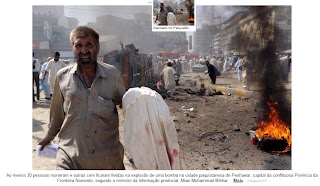 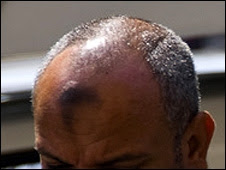 Its not in Europe....Its Pakistan 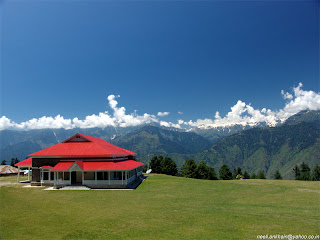 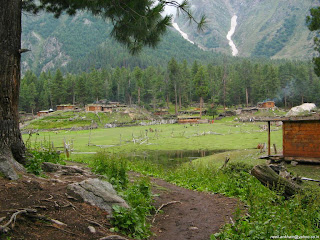 another place of Lalazar 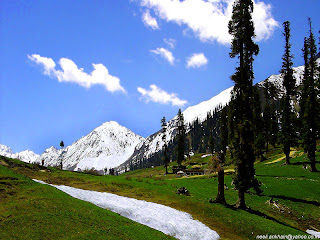 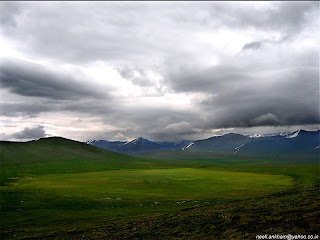 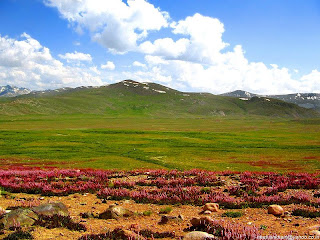 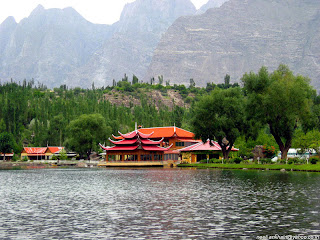 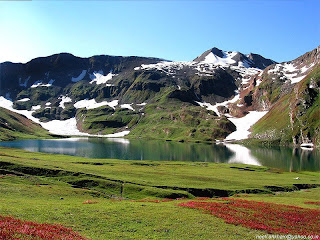 Another Beautiful meadows in Pakistan 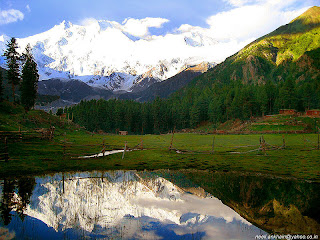 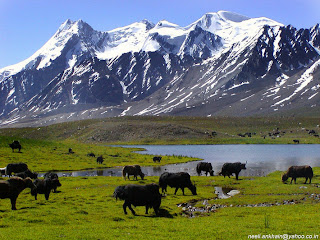 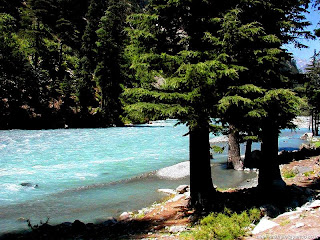 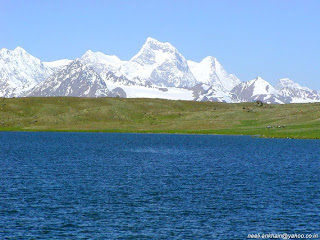 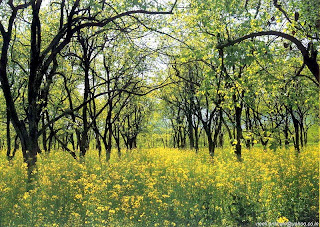 Dudipatsar lake is still hidden from the tourist attraction. This beautiful lake is located in Kaghan Valley 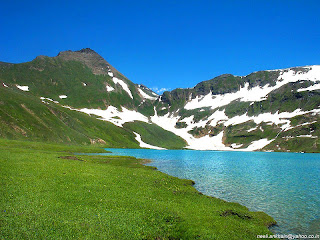