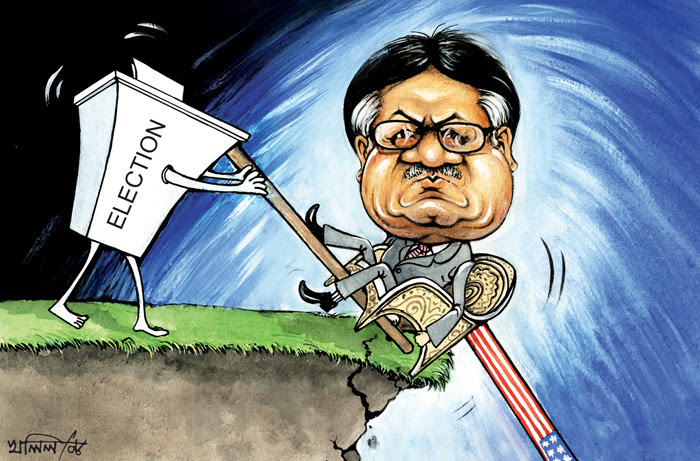 ahh so sad carol i ve been telling u all he fucked us and its sad? he sell pakistans to usa for $ u know??????????
he killed pakistanis for no reasonnnnnnnn

Carolina Padovezi: but to kill is the solution?
guys like me he sold them to usa , and told usa tht this is terrorist
...

Presidency welcomes SC verdict
Updated at: 2141 PST, Friday, July 31, 2009
ISLAMABAD: “The Supreme Court short order today declaring the November 3, 2007 actions of General Pervez Musharraf as unconstitutional is a triumph of the democratic principles, a stinging negation of dictatorship and is most welcome”.

The short verdict as has become known thus far declaring actions of November 3, 2007 as unconstitutional is what the PPP and President Asif Zardari has all along maintained against the dictatorship of General Musharraf, spokesperson to the President former Senator Farhatullah Babar said in a statement on Friday.

Farhatullah Babar recalled that soon after the November 3 declaration of emergency the former Prime Minister and Chairperson of the party Shaheed Mohtarma Benazir Bhutto cut short her visit to Dubai and rushed to Pakistan to challenge the emergency and dictatorship even at the risk of her life.

The negation and rejection of dictatorship and its actions of November 3, 2007 today by the Supreme Court is a triumph of the principles for which the party fought and its Chairperson Shaheed Mohtarma Benazir Bhutto and countless workers laid down their lives, he said.

He further said that as details of the judgment are still awaited it is premature to comment on it in detail at this stage.

4 times army cheif has taken control of pakistan and no one was ever punished, u know army cant be presedent of country if they do its breaking of constitution with mush did and for breaking constitution punishmen is death plenty its even in ur country everywhere

and not only this
he orders army to give its weapons to usa to fight agains talibans
our weapons and plans to usa????????????????