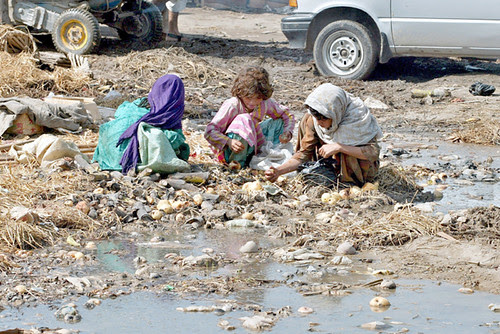 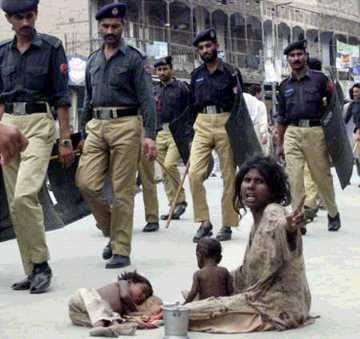 80 %Pakistanis spending 50-60 % of their total income on food have been forced to curtail clothing, health education expenses to stave off starvation...
http://civilsocietypakistan.wordpress.com/ (source)
Not everyone who is poor was born into poverty. New research shows that large numbers of poor people have fallen into poverty within their lifetimes as is happening in recent months in Pakistan where poverty is on rise due to food inflation and shortages.
Any inflationary impact that increases the rates of food badly impacts majority of people living in Pakistan as more than 80 per cent of them earn less than $2 per day (isso mesmo menos de 2 dolares por dia..). They are more vulnerable than the affluent class because they spend 50-60 per cent of their total income on food. When food becomes expensive they have to curtail other essential expenses to save themselves from starvation. It is time for starvation for those 23.4 per cent of the population that the government officially recognizes at living below poverty line.
Conventionally, poverty has been measured as a stock, considering the numbers of poor people at a particular moment in time. Such stocks can be compared across two points in time and the net change calculated. Such analysis does not reveal, however, exactly how this change was derived: how many people fell into poverty within the specified time frame, and how many others concurrently escaped poverty?
Poverty is definitely on rise in Pakistan as its citizen fight to buy wheat, rice or ghee at whatever price they could get it. Price has lost significance, as it is the availability that matters. Past experience indicates that poverty rises sharply in these circumstances. This according to economic experts is the right time to assess the poverty in the country, which would give the planners an insight to the vulnerable population of the country that could fall into poverty on slightest disturbance in economic out look. 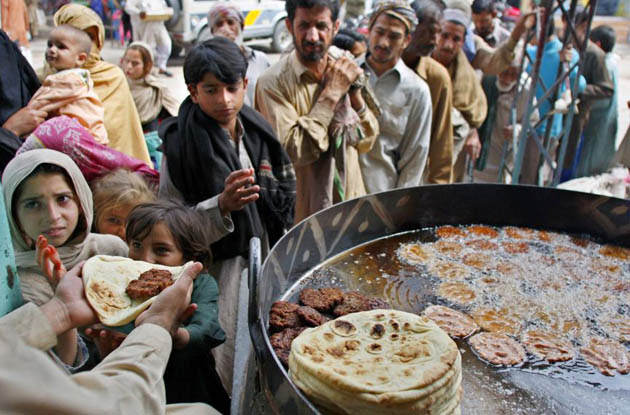 The experts point out that except fixed income groups or elite class majority of families in Pakistan buy food on daily basis. There are families in poor localities that do not afford to buy as 20 kg atta bag. In normal circumstances they used to buy one or two kg of this commodity on daily basis or the shopkeeper in their neighbourhood provided them the 20 kg bag on credit.
They said now that the atta is not available through normal retail channels. They have to buy atta now at cash and that too at much higher rates. The alternate staple food to atta is rice the rates of which have risen more sharply.
Almost doubling of edible oil rates in one year and historic high rates of vegetables have further compounded the problems of lower middleclass and poor families. The poor families have been forced to neglect the health or education (acabam deixando de estudar porque nao tem como pagar..)if their children just to ensure that they are adequately fed.
Poor planning and bad governance has landed the nation in to present mess. According to economists the government�s poverty reduction strategy lacked substance. They said the government did not conduct any study (simples, se esqueceram deles, nem planos tinham) about the development and policy measures that reduce poverty. They said studies in neighboring India indicate that investment on road infrastructure reduces poverty more sharply then other developments. They said India experience shows that for every one million rupees spent on rural roads, 124 poor people could be lifted above the poverty line-the largest rate of poverty reduction among all types of investment. Furthermore, one rupee invested in rural roads would generate more than five rupees in returns from agricultural production, which is the second-largest production growth effect after agricultural research and development (R&D). Additional government spending on agricultural R&D and extension has the largest impact on production growth, with a cost- benefit ratio of 13; it also leads to large rural poverty-reduction benefits, second only to rural road investment. Additional government spending on education has the third-largest impact in reducing rural poverty, largely because of the increases in non-farm employment and rural wages that it induces. Finally, public investment in irrigation has an impact on agricultural productivity similar to that of education investments and only a small impact in reducing rural poverty. The economists regret that no such analysis is available in Pakistan.
Me diz se num eh uma droga de governo???? O cara foi capaz de matar a propria mulher (Benazir), porque ele iria se importar com seu pais? 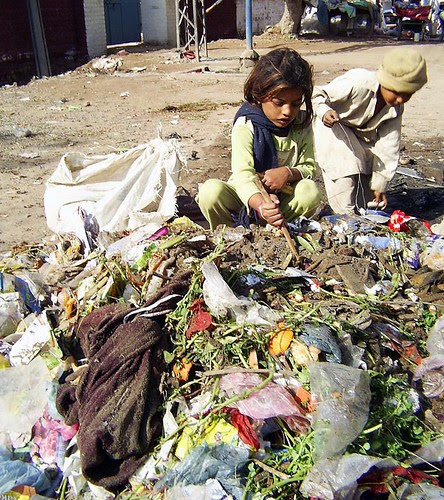