Islamabad International Airport or Chaklala Airbase (Urdu: چکلالہ) (IATA: ISB, ICAO: OPRN) is the third largest airport in Pakistan, it is located in Rawalpindi, Punjab. It has been renamed Benazir Bhut 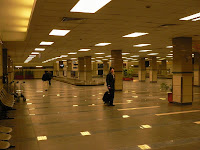 to International Airport after the late Prime Minister Benazir Bhutto. The airport is actually located outside of Islamabad, in the area of Chaklala Rawalpindi. Being the main airport for the Pakistani capital it often hosts officials and citizens from other nations. The airfield is shared with the transport and liaison squadrons of the Pakistan Air Force. Due to the ever-growing need for better facilities and services available for passengers, The Government of Pakistan is working with foreign construction companies to develop a world-class airport in Islamabad, New Islamabad International Airport. It has been estimated that the airport will be the biggest in Pakistan. The new location of the Islamabad International Airport has been selected at Fateh Jang (or at Tarnol, as reported by other sources [4]), nearly 5km from Islamabad. The construction of the new airport is underway and completion is estimated to be in 2010. In fiscal year 2004-2005, over 2.8 million passengers used Benazir Bhutto International Airport. 23,436 aircraft movements were registered.

Situated outside the capital city of Pakistan, Benazir Bhutto International Airport handles VIP passengers who are foreign diplomats or high government or military officials. The Rawal Lounge has been designated for use by such passengers. It provides an executive environment with all the required facilities for such high-profile distinguished guests. [5] There are separate lounges for international and domestic economy passengers. The domestic and international lounges have been provided with all the required facilities that include snack bars, satellite TV, public telephone and Internet services. There are also lounges for transit passengers who may be travelling further internationally or domestically. The lounges also have designated prayer areas. The CIP/VIP lounge can be used by first and business class passengers travelling on international or domestic flights. Passengers have to be issued an airline card from the check-in staff. The cost is USD 6.00 per international passenger and 100 rupees for domestic passengers. There are also light savoury snacks, non-alcoholic beverages, satellite TVs, newspapers and magazines, telephones, fax facilities, and free wireless Internet. Passengers who require banks which offer credit card facilities can use Askari Bank Ltd.

The airport has a wide variety of duty-free shops, restaurants, free wireless Internet services and a souvenir shop. The current airport is able to handle 11 wide body aircraft at one time, with additional five parking places for light general aviation aircraft. At the moment, the airport does not have any air bridges installed, so buses take the passengers from the airport terminal to the aircraft where air stairs are used.

There are numerous television monitors and mobile connecting points in the terminal to allow passengers to check flight times and recharge their phones. There are a string of financial exchange counters and commercial banks such as National Bank of Pakistan, Habib Bank Ltd, and MCB Bank Ltd. MCB and Royal Bank of Scotland [formerly ABN AMRO Bank] have also launched ATMs that are linked to the global MasterCard, Cirrus and Maestro networks.

we should also not ignore Energy Crises in Pakistan