Muslim Dress Codes on All Swimmers 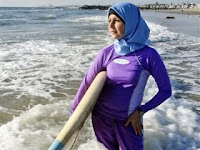 British swimming pools have begun hosting special Muslim swim sessions during which swimmers — including non-Muslims — are banned from entering the pool if their swimming attire doesn't comply with dress code required by Islamic custom.

The special sessions in Britain have elicited anger from critics who say they are divisive and put a strain on relations between Muslims and non-Muslims, the Telegraph reported.

The trend counters developments in France, where a woman has threatened to sue after being told she could not wear her "burquini" — a headscarf, tunic and trouser swimsuit worn by Muslim women – on hygiene grounds, the paper reported.

One British lawmaker defended the Muslim swim sessions, telling the Telegraph that they show an appreciation for certain religious groups, like Muslims, who have strict rules on segregation for activities including sports.
=) Carol às 11:24